Island Prison: The Right to Freedom of Movement on Lesvos, Greece 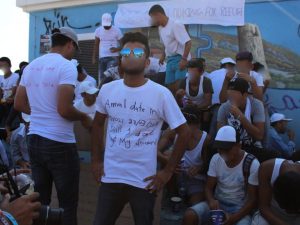 On a Monday evening in late August, Afghan refugees gathered in Sappho Square in Mytilene on the small island of Lesvos, wearing shirts with the date they arrived in Greece. Many shirts revealed an arrival date well over a year ago, yet these men have been trapped on the island while they wait for a decision from the Greek Asylum Service; their lives in total limbo. This type of action has become a common occurrence on Lesvos. These Afghan men were protesting in solidarity with others who protested in mid-July and were subject to brutal police beatings and arrests. The July protesters simply asked that the Greek government follow Greek and international law and allow freedom of movement within Greece for refugees.

Throughout the late summer of 2017, around one hundred refugees arrived on Lesvos every day, outpacing 2016 levels. The largest camp, Moria, is currently ‘housing’ two-and-a-half times more people than its capacity of 1,800, and the island has a dire shortage of medical care and legal aid. Despite deteriorating conditions, around 7,000 refugees remain trapped on the island, some illegally detained while their asylum applications are still pending, and nearly all unable even to travel to the mainland Greece to access the greater resources available there.

The EU-Turkey deal of March, 2016 may have been legal in its conception, but it has resulted (among other serious consequences) in the near total lack of freedom of movement of refugees, in violation of international and Greek law. Article 12 of the International Covenant on Civil and Political Rights (largely echoed in the European Convention on Human Rights) clearly states that any person “lawfully within the territory of a State shall, within that territory, have the right to liberty of movement and freedom to choose his [sic] residence” subject only to those restrictions necessary to protect national security or safety.

Further, Articles 26 and 31 of the Convention Relating to the Status of Refugees affirm the obligation of States to allow refugees freedom of movement, and prohibits penalizing persons who enter a State irregularly, providing that they register their presence with the authorities. Per the Office of the High Commissioner for Human Rights, any derogation of the freedom of movement must not only be necessary, but must be narrowly tailored and explicitly stated and justified in domestic law. Greek law contains no such provisions, and the Greek Constitution itself guarantees in Article 5 full protection of freedom for all persons, regardless of nationality. 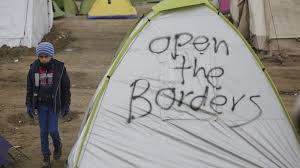 One could argue that applicants for international protection are not, strictly speaking, “refugees” until there is a positive decision on their application, and therefore are not “lawfully within the territory” as required by the above-mentioned legal instruments. The European Union, however, lays out their detention policy for applicants in a directive stressing the importance of being in “accordance with the international legal obligations” laid out in Article 31 of the Refugee Convention, clearly implying that applicants should be considered refugees for the purposes of detention policy. Additionally, the law requires that applicants be treated like other foreign nationals in significant ways. Under Greek Law 4375, applicants are issued an International Protection (IP) Applicant Card upon registration with the Greek government, which serves as their legal identification document. Applicants are allowed to hold employment and remain in the country as long as they hold a valid IP card.

The restriction to the island is disastrous for the refugees on many levels. The support systems for refugees put in place by the Greek government, UNHCR, and nongovernmental organizations are often poorly planned and managed. The flow of refugees has overwhelmed these systems. The camps in which refugees live are plagued by frequent loss of electricity and water supplies. Refugees stand in lines of hundreds of people to get a small amount of food. The availability of medical care for physical and mental illness is at crisis levels, and there are only a handful of Greek lawyers to represent thousands of applicants in their asylum applications and appeals. It can take anywhere from a few months to over a year and a half to receive a decision that, for many, is literally the difference between life and death.

Individually, refugees are susceptible to mental and physical deterioration. Though it operates in the same legal framework, Greece approves far fewer asylum applications than other EU countries, which can exacerbate feelings of hopelessness among refugees in Greece. Many refugees have survived traumatic events or otherwise suffer from mental illness. Indefinite confinement within fenced-in camps on a small island in a country with a depressed economy only re-traumatizes them. Seemingly constant harassment from police, the lack of any predictability in the asylum application process, and violations of human rights lead to frequent protests, like those in Sapphos square, or hunger strikes lasting up to forty-one days. Granting refugees freedom of movement within Greece would not cure all that infects the current situation on Lesvos and the other Greek island “hotspots”; many similar issues plague the camps on the mainland. However, allowing them basic freedoms, such as the choice of where to live, some agency, and the possibility of accessing resources on the mainland could be an important step in the right direction.

On October 19, 2017, refugees again occupied the Sappho Square, many of them families with young children who do not feel safe in the overcrowded camps. As of November 16, they remain there in protest, waiting for a response to their pleas.

Hannah Eash-Gates is a third-year student at Northeastern University School of Law. She recently worked as a PHRGE Fellow with the Lesvos Legal Center providing legal and other support to refugees arriving on the island.